Attention Members of the Tripawds Community:

Whereas, the secret society of Monkeydogs have been recognized as a legitimate cross species, and

Whereas, the Monketbutt Federation has been proven to align forces in defiance of the Tripawd way,

The time for solidarity amongst all three legged dogs and their packs is imminent.

Therefore, let it be known that members, fans and followers of the Tripawds Blogs community and three legged dog discussion forums are encouraged to show their colors and stand with Fearless Leader Cooper in support of the fun antics instigated by Monketbutt Bunny which help liven otherwise difficult situations and prove that it’s better to hop on three legs than limp on four.SM

In other words, official Anti-MonkeyButt Force uniforms for all seasons and A.M.B.F. sanctioned casual wear are now available in the Tripawds Gift Shop. Check out the three legged humor section for two new designs available on many t-shirts, sweatshirts, caps, mugs and more!

Tripawds show your solidarity against the evil forces of the mischievous Monkeybutts! Wear the officially sanctioned uniform of the Anti-MonkeyButt Force.

Tripawds Rule. Monkeydogs Drool! Stand up loud and proud against the evil Monkeybutt forces with the official No MonkeyButts emblem on t-shirts, sweatshirts, caps, mugs, bags and more gifts.

Show your three-legged solidarity with Tripawds gifts for the home and office featuring the No Monkeydogs emblem.

This site uses Akismet to reduce spam. Learn how your comment data is processed.

FTC Disclosure: Articles and product reviews here may include affiliate links to third-party websites which might earn us a small commission when items are purchased. Thank you! 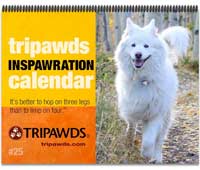 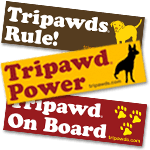 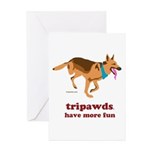 Tripawds Apparel and Gifts is brought to you by Tripawds.
HOME » NEWS » BLOGS » FORUMS » CHAT » YOUR PRIVACY » RANDOM BLOG